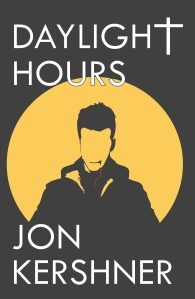 Someone is killing monsters along the East Coast. As an endangered species, Kris should be laying low. All he wants is to run his territory in South Florida with as few complications as possible. When he encounters three young siblings running for their lives, complicated takes on a whole new meaning.

Kris knows he shouldn’t get involved. Vampires are practically human during the day and Kris learned a long time ago that not all monsters come out at night. Going against his instincts, and jeopardizing his immortality, Kris must use every ally in his arsenal–supernatural and human alike–to protect the three runaways. Daylight Hours is the first book in a series surrounding the Vampire, Kris Grant as he spends his immortal life trying to do what he does best; survive.

Sure, being Territory Master has its perks: money, power, responsibility…money. It’s not an easy job, but Kris Grant’s been playing the part and keeping the murdering and massacres down to an all-time low. So, why isn’t he getting the respect he deserves?

In the action-packed sequel to Daylight Hours, we find the inexperienced and sarcastic Vampire, Kris Grant struggling to control his territory. He’s never taken his role seriously and the consequences arise when two rogue Vampires come to town threatening everything Kris has built over the years. Now, with the aid of an unlikely team, Kris must battle his own ego and begin a dangerous hunt that will push him to his physical and emotional limits.

Friendships are tested, old enemies emerge, and new ones surface as Kris learns what it really means to be Territory Master.

Click on the cover images above and meet Kris Grant, Territory Master of South Florida.